Gaspesie was not the only place hit with droves of desperate tourists this summer. The pandemic has also made a tiny little beach in the Western tip of Laval explode with people from all over. You'll find this white-sand destination on Riviera street in Laval-Ouest. Its official name is "Berge aux quatre vents" and its entry is totally free. In recent years, you could always find a few people on its shores, mostly locals just coming to chill out. There has also been some small improvements (sand brought it, chairs installed, etc). But the summer of 2020 was very different than other years. Looks like word got around, bloggers blogged, families got together, and all of a sudden, BOOM, hoards of people were lining up for a little corner of sand under the sun. If you didn't know any better, you could have believed yourself to be at the Beach Club!

For the readers new to the area, the neighborhood now known today as “Laval-Ouest”, used to be called “Plage Laval” (“Laval Beach”). It was a popular spot for Montrealers to spend their summer. It had everything one would need for summer fun: hotel, dance hall, restaurants, a movie theater, etc. The whole thing actually started in 1926, when two American brothers, The Smadbecks, created a vacation colony of chalets for summer-use only. It was in fact a remarkably close replica to something they had already developed in Long Island, New York. Plage Laval’s beach then became so popular, visitors had to come early to save their spot on the sand. While driving around Laval-Ouest today, one can still see many of the relics of this era with little chalets (converted into permanent homes) scattered among newer constructions. 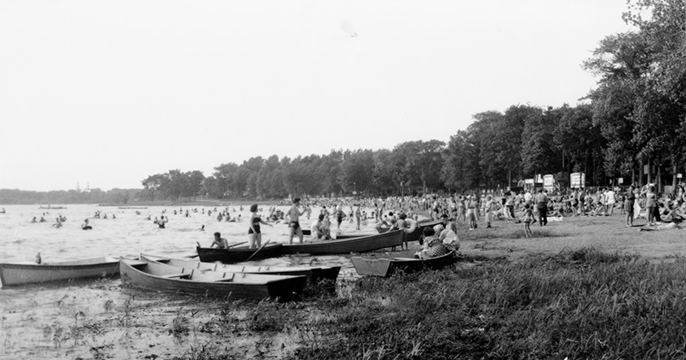 What the locals have to say

While chatting with the locals living around the beach, it quickly became obvious that feelings are mixed over its revival in popularity. The more positive points seem to be around the feelings of pride many have for seeing the local area restored to its original glory after no more than 50 years! Many have reconnected with old friends and made some new ones along the way. The spirit of the summer vacations of their youth has been somewhat restored. Nostalgia galore.

And then, the downside

Not all is well however with this new arrival of tourists. Although most newcomers treat the area with respect, there are always those who do not. The beach is located on a residential street, which means an influx in noise due to cars. Loud music, garbage and cigarette butts frustrated the locals. The lack of washroom facilities lead to hum… complications (avoid walking if the bushes for a little while). Two brawls were even reported. It would seem that sun, alcohol and testosterone are not always the best cocktail.

While we wait for permanent solutions from the city, it’s the local volunteers who took it upon themselves to disinfect tables, rake the sand, pick up trash, and play “police”. By their dedication and their presence, they help maintain a certain control of the beach. They act like the beach’s guardian angels in a certain way, and the rest of us are very grateful. For example, impossible to visit the beach without meeting notable local, Mr. Richard Lamothe (left) that many have nicknamed “Mister Beach” or “The Sheriff” or even “Santa Clause”. 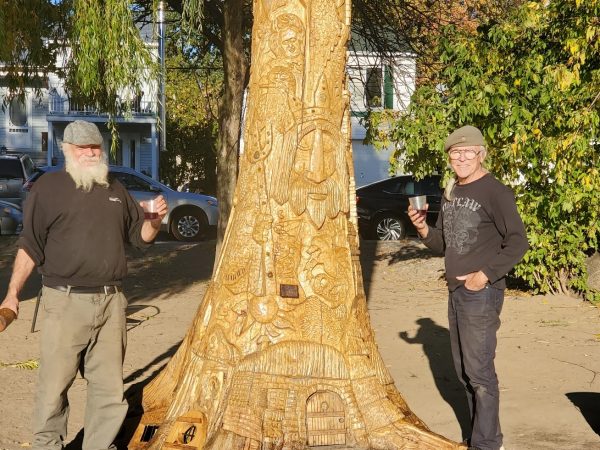 Local contributor and sculptor Mr. Serge Roy (right). He worked hours on end on a deceased ash tree, transforming it in a magical work of art. Just coming to see the tree is worth the detour.

The local citizen committee (CCLO) has told us that many pressures have been put on the city to bring in more supervision and management due to the influx in visitors. Covid-19 measurements seemed to also have been quickly forgotten (flashback to Rawdon falls anyone?). Mrs. Jeanne Tremblay, who sits on the committee explains that pressures have had a certain positive effect. Although toilets where not installed as requested, large garbage containers were brought in. (Public health considerations, due to Covid measurements, would have been the reason why the city could not install the temporary toilets this summer.)

One of the beach angels, Kim Monahan, regularly rakes the algae in front of his house.

The Mille Iles River’s pollution levels were the cause of Laval Beach original demise and eventually being shut down for swimming. In the 1970’s, this wonderful area’s popularity declined and quickly became only good childhood memories for many. Every summer since 2001 however, the City of Laval, along with other government associations, have been working diligently on a water testing campaign of all the river banks surrounding the island of Laval. Continual improvements have been noted. According ot Nicholas Borne, Municipal Counsellor: “The water is good for swimming… most of the time”. What keeps him from saying "all the time" has to do with sewage overflow after very heavy rains. “The area of Riviera is actually the best places to swim in Laval”, says Borne. 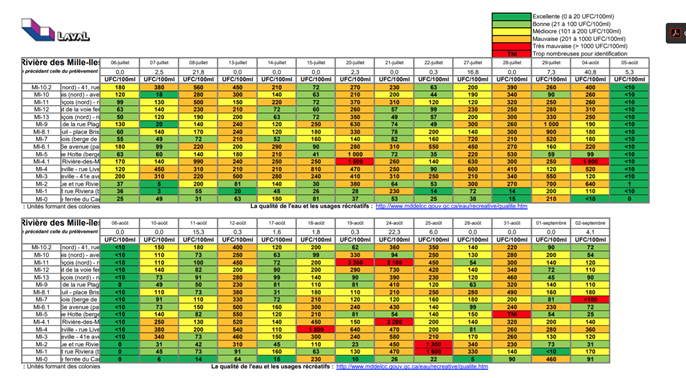 Regular testing results available on the City of Laval website

Many brave visitors did not hesitate to take a dip this year, and no incidents have been reported.

Floods and the Holy Dike

Impossible to talk about the Berge aux Quatre Vents without mentioning a particularity of Riviera street. In fact, the entire area around the beach was ravaged by the flood of 2017, and again in 2019 (although an inflatable dike was installed quickly to limit the damage that year).

Regardless of the floods, the post-covid real estate conditions were so hot, that even houses that had been previously flooded, and are situated in the worse flood zone, have been sold… and at incredibly surprising prices. One factor that has had a significant impact on buyers is the temporary dike installed in 2020 as a preventative measure. Now removed, it gave buyers confidence that the city is taking care of the residents of this area and committed to preventing future damage. The dike of 2020 was one kilometer long and the residents behind it saw it as a true blessing.

Yes the dike had its role in improving buyer confidence, but the beach and summer vibes of the area didn't hurt either. One of our clients who just moved in from Montreal this summer explains: “We fell in love with the beach and wanted to move here. Of all the beaches I’ve visited in Quebec, here is where I feel the most in my hometown of Cancun”. She tells us that her friends also fell in love with the area and are looking to move here as soon as another house becomes available.

According to Borne, the city has big projects for the beach. Notably, a chalet with toilets and showers and kid pool/water park. The city is preparing a presentation to the residents with plans. There will be consultations in the next months before opening call for tenders. However, work could start as early as 2021. Let’s hope that the pandemic doesn’t set this project back, as it is greatly needed (especially the toilets!).

Only the future holds what awaits us in Laval Ouest (and the rest of the world, for that matter). We are excited to see what 2021 has in store for our little corner of paradise. 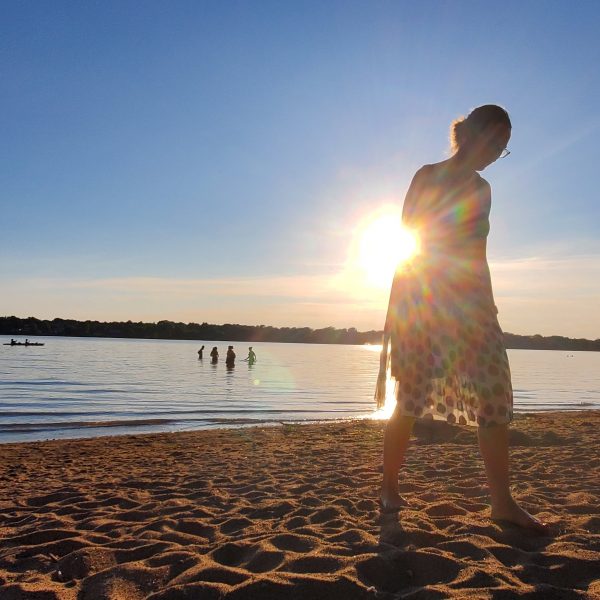 The history of Laval-Ouest in 3 minutes (French only):

Your comment has been received and should be approved shortly.

By continuing your navigation, you agree to the use of cookies by (Français) Vaillancourt et Ass. | Courtier immobilier Laval - Rive-Nord and third parties to adapt the navigation, content and advertising to your preferences and interests, and to collect data to statistical purposes. To learn more, click here.